If you are worried about Coronavirus COVID-19 you can check your symptoms on NHS 111. If you need to speak to a doctor over video about any other symptoms you can book an appointment below.

Everything you need to know about joint pains and aches, including causes, common symptoms and treatment.

What is joint pain?

Joint pain commonly refers to aches, soreness and discomfort in any of the body's joints – common examples being pain or aches in the knees, shoulders, hips or elbows.

Joint pain is prevalent in the UK population, and typically doesn't require hospitalisation or invasive treatment to address.

What are the symptoms of joint pain?

Joint pain isn't something you need to put a brave face on. See a doctor the moment it strikes and let their advice guide you to a pain-free future. This is especially the case in the following cases:

How common is joint pain?

There is a slight gender difference in the prevalence of joint pain, though it is not entirely clear why. Arthritis Research found 27.1% of men and 32.5% of women reported musculoskeletal conditions. Further, joint pain is more common in lowest income groups (43%) than it is in groups with the highest income (27%).

There are three main factors that affect musculoskeletal health before we consider any kinds of condition with joint pain as one of their symptoms:

Other than injury, infection or the overuse of a joint, arthritis is one of the most common causes of joint pain, arguably the cause of joint pain in "most cases" when it comes to pain inside multiple joints simultaneously.

Typical causes of acute arthritis include viral infection, joint disorder (be it an all new condition, or aggravating an existing condition) or gout.

Common disorders causing pain around the joints, but outside of them, include fibromyalgia, polymyalgia rheumatica and tendinitis.

What forms of joint pain are there?

Some of the most common types of joint pain found in the UK today.

There are no results for your search. Check your spelling or use fewer words or characters.

Causes pain and inflammation in the joints. More common as you get older, but can affect anyone.

A common complaint in people of all ages, either as a result of injury or day-to-day wear and tear.

A type of arthritis that causes sudden and very severe pain, swelling and inflammation, usually in just one joint.

Symptoms vary greatly depending on the cause, be it general wear and tear, injury or an underlying condition.

The knee bears most of the full weight of your body, and so is naturally the most vulnerable to damage.

Rib cage pain can vary in sensation and location, due to several possible causes of the pain.

One of the body's most mobile joints, making for a particularly debilitating form of joint pain.

Whether from injury, long term conditions or RSI, wrist pain is a source of pain that can be easily addressed.

Occurs when one of the discs of cartilage between spinal vertebrae is damaged.

Long term or short term, sports injuries are often worth speaking to a GP about to effectively treat and manage.

How is joint pain diagnosed?

First, the doctor will ask questions about your symptoms and medical history, as well as about how long you have experienced your joint pain for. If necessary, they will carry out a physical examination, asking you to position your device to show the joint in question on a video consultation, or moving and manipulating the joint in a traditional consultation.

Expect to answer questions about the severity of the joint pain you experience, what makes the pain worse, and how your symptoms have varied (if at all) over time.

How is joint pain treated?

Treatment for joint pain depends entirely on the underlying cause. That said, there are a few themes in joint pain treatment approaches, no matter what the cause. Inflammation, for instance, can be relieved with the use of nonsteroidal anti-inflammatory drugs, or alternatively with steroid injections into the inflamed joint. Pain not resulting from inflammation, on the other hand, is treated with paracetamol and other painkillers.

Further, podiatrists can provide invaluable assistance with lower limb or foot pain, occupational therapists can help with adaptations at home or work to make the effects of your pain less impactful, and there is evidence to suggest that acupuncture and other complimentary therapies can be helpful too.

With an accurate diagnosis determining the exact cause of your joint pain, as well as what exacerbates and relieves it, your joint pain should at the very least be easier to manage.

Remember to speak to a doctor if you are experiencing joint pain without an obvious cause – especially if your symptoms are present for more than a few days. Scroll to the top of the page to read about specific signs and symptoms to look out for, making sure you catch joint pain early on and give yourself the best possible chance of avoiding the inhibition of your day-to-day movements.

Push Doctor is regulated by the Care Quality Commission (CQC), the independent regulator of health and social care in England.

They are the foremost authority in our industry, assessing health providers' ability to provide people with safe, effective, compassionate and high-quality care – be they offline or online doctors.

Push Doctor is registered with the CQC under the name 'Push Dr Limited', with the registration number 1-5345986073.

Our most recent inspection took place in May 2019, concluding that the service we provide is safe, effective, caring, responsive and well-led – gaining a 'Good' rating overall. You can read the report in full on our CQC profile.

All users are required to go through a two-step verification process to create and restore an account. Online access to an account is protected with a password that a user creates and PD apps support touch ID technology.

When using the platform, all personal data is transmitted through the internet using secure socket Layers (SSL) technology. SSL technology causes a browser to encrypt entered information before transmitting it to our secure server. SSL technology, an industry standard, is designed to prevent a third party from capturing and viewing Personal Data.

Push Doctor is registered with the Medicines & Healthcare products Regulatory Agency (MHRA), and fully approved to sell medicines from our website.

We have been approved sellers since our inception, with the company number of C46132. As authorised MHRA sellers, we are approved to sell the following as and when we need to do so:

We regularly review the medications that we prescribe on our service, making sure to meet best practice and only ever provide outstanding care. With this, and our CQC rating, you know you are in safe hands.

All of our doctors are NHS-trained and registered with the General Medical Council (GMC), ensuring that you are only ever receiving the best possible care and advice.

We encourage you to familiarise yourself with our online doctors, check their GMC profiles for yourself – every doctor on our platform has one, which you can easily search the GMC's database for.

In the majority of cases, we even give a direct link to our doctors' LinkedIn pages so you can see where they have worked in the past and where they were educated.

You can also see who our medical support and data protection teams are as well.

We welcome scrutiny, and encourage you to get in touch if you have any questions, concerns or comments about the people that power Push Doctor. 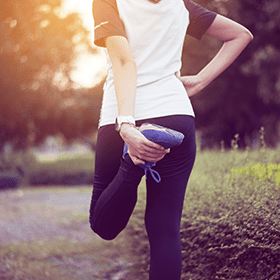 Getting on Top of Achilles Tendon Pain: An Exercise Plan

Getting on Top of Hip Pain: An Exercise Plan