Can Metabolism Be Blamed For Weight Gain?

As you enter your 30s, it can suddenly seem much harder to stay slim than it once did. But why is this?

One popular opinion is that your metabolism is to blame, and that a slower metabolism is just an unavoidable part of getting older. However, if you dig a little deeper, you'll see that this isn't necessarily the case.

Before you can start holding your metabolism responsible for things, you need to know exactly what it is.

Briefly, your metabolism is the set of chemical processes that turns your food and drink into energy. This energy is used by every organ in your body and you couldn't live without it.

The concept of your Basal Metabolic Rate (BMR) is important - this is the minimum amount of energy your body needs to continue functioning normally while you're at rest (i.e. sitting down and not doing anything).

If you have a high BMR, your body requires more energy to function, while a low BMR is a signal that your body can carry on as normal using a low amount of energy.

If you take in more calories than your body needs to function, the you energy don't use becomes that one thing we all dread - fat.

What happens to metabolism as you get older?

While your metabolism is thought to naturally decrease by around five per cent per decade post-40, there are various other factors that can influence your BMR.

During your teenage years and early twenties, your body is still growing. This requires energy, which means you have a much higher BMR. A happy side effect of this is that you might have been able to eat as much as you want without seeing this reflected in your waistline.

Of course, once your body stops growing, it doesn't burn as much energy any more and your BMR becomes lower.

On top of this, we all start to lose muscle mass as we get older, and while working out can slow this process down, you can't stop it entirely. It's thought that a person's muscle mass will drop between three and five per cent every decade after the age of 35.

Lifestyle changes are also a factor. Whether it's a job that requires you to sit at a desk all day, a lack of time to do all the exercise you once enjoyed, or even pregnancy, there are all sorts of reasons why you might not be burning off as many calories as you once were.

It's easy to tell yourself that if your mum and dad put on weight in their forties, you're pretty much doomed as well. However, you're more likely to inherit characteristics that affect your metabolism, rather than have a fully formed metabolism passed down through generations.

If your family don't generally have large muscles, or have difficulty building muscle mass, this makes it harder for you to bulk up in a way that'll influence your BMR.

If it's not your metabolism, what is it?

It's easy to see why people might pin the blame for their excess fat on a slow metabolism. After all, your pesky body simply isn't using as much energy as it should do, right?

Sadly not. Studies have shown that overweight people actually require more energy to function and can have a higher BMR than slim people. This is actually quite logical, as moving a heavier body is of course going to need more energy than moving a lighter one, while there's also added pressure on organs such as your liver and heart.

So if it's not your metabolism that's responsible, what could it be? As you might have feared, the most likely reason is the classic combination of a poor diet and not enough exercise. Simply put, if you want to stay thin, you need to be using more energy than you're taking in.

Other possible reasons for your weight gain include:

Not only are you likely to lose muscle mass, your body will also require less energy to function normally. Your metabolism will react to this by lowering your BMR, so you won't be burning off calories any quicker.

In addition, a lot of people find crash diets hard to stick to. Falling off the wagon often results in binge-eating, leaving you even worse off than before you started.

Putting on weight is a symptom of certain illnesses, such as an underactive thyroid. Speak to a doctor if you think your weight gain isn't reflecting your diet and exercise regime.

Some medication, such as steroids and the contraceptive pill, can cause weight gain as a side effect. If you're concerned about this, tell your doctor before you start taking the medication and see if there are any alternatives.

If you don't sleep properly, you won't have any energy during the day. This will make getting any exercise harder, as you'll be too tired, while it also means you're more likely to turn to sugary snacks to get you through the day.

Some studies have suggested that stress can slow down your metabolism. Not only that, if you're stressed, you're more likely to turn to comfort food, which will soon make its way to your waistline.

Alcohol affects your body's ability to metabolise (break down) food, meaning most of it will get stored as fat.

Is there a difference between male and female metabolism?

We've already seen plenty of factors that can affect your metabolism and lead to weight gain. Gender can be a small factor, but it's important not to generalise too much and realise that both men and women have plenty of ways to manage their weight and BMR.

On average, men tend to have a faster metabolism than women. In general, they have more muscle mass and less body fat - this is why the recommended daily calorie allowance for men is higher than for women.

For women, the biggest challenge for their metabolism is pregnancy. During your pregnancy, you'll both consume and burn more calories in order to provide your baby with all the nutrients it needs.

However, during this time you won't be doing as much muscle-building activity as you might have done previously. It's also difficult to get back to your old dietary habits once the baby is born. It's not hard to imagine what will happen if you continue eating in the same way as you did while you were pregnant.

What can you do to manage your metabolism?

It's not possible to permanently â€˜change' your metabolism. However, as we've seen, you can influence the factors that can raise or lower your BMR, as well as controlling your diet and exercising regularly in order to slow down weight gain.

What and how you eat will have an effect. We've talked about crash/fad diets already and looked at the reasons why they're best avoided. This goes for shortcuts of any kind - there are plenty of articles that will try and tell you drinking green tea or eating more spices will help speed up your metabolism. They might have a small effect, but they're not enough on their own.

It also means that by the time lunch rolls around, you'll be so hungry that the urge to eat more than you need will be hard to resist. You should be eating at least three meals a day, while many people find that breaking it down into five or six smaller meals throughout the day is an effective weight management technique.

Talk to a doctor about your metabolism

If you're worried about weight gain as you move into your thirties, you can talk to one of our doctors about keeping control of your metabolism.

Whether you suffer from an underactive thyroid, are pregnant or planning to start a family, or if you simply have general concerns, with Push Doctor you could be talking to a GP. 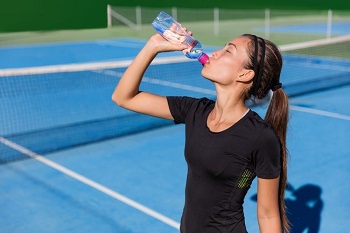